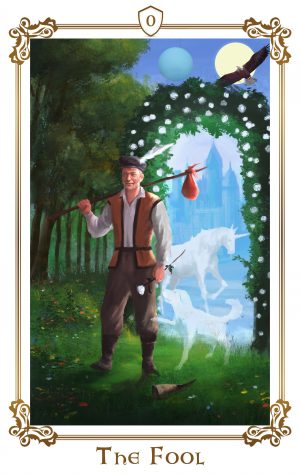 The Fool Card Emerald Tolemac.  This card is from the Emerald Tolemac Tarot deck. The images from our deck are all copyright, created by Madeline Rose and artist Ahmad Sonhaji Silitonga.

The Fool reminds us that while going with our intuition may seem foolish, especially to others, when we do so, we are supported by spirit. While spirit is unseen, it does manifest itself in the world around us. When we recognise that spirit is leading us, it makes itself more available to us. Furthermore, the message of this card is that only when we journey with purity and steadfast faith toward the promptings of spirit, can we hope to achieve the great destiny meant for us. We can’t hope to bring to fruition a successful outcome for the challenge that we are facing without that purity and faith. In a Tarot spread, The Fool reminds us of these things.

The young man carries a white rose in his left hand, representing the purity needed in his conscious thoughts to transport him to the completion of his quest. White is the colour of purity and in some traditions the colour of mourning. The fact that he is holding it represents the blank slate mind that he emerges with – beginner’s mind – which is a gift in itself. The association of mourning is a reminder of mortality to the Fool and something to be kept close. Left is also the side of the body associated with death and dying and is an important driving force for the journey.

The Fool stands with his right foot points to the right, which means that he will allow his UNconscious, intuitive thoughts to guide him on his journey. He’s ready to embark on a journey but appears unsure as to which way to go. Or perhaps he doesn’t much care in which direction his feet will carry him.

He carries a bundle hanging from the end of the stick that sits over his right shoulder. The colour of the handkerchief which holds his belongings is a deep orange, the colour of the 2nd chakra, which aligns with his beginning stature in the journey of spiritual development. His sack of provisions point back toward what is hidden – for it is not yet ready to come to fruition. Yet from that ethereal point lays his true source.

His dog stands to his right ready and waiting to hear his command. This animal will serve as his guide in the journey. The dog is protector, confidant, friend, and will keep him balanced in a way appropriate to justice and truth as connoted by both the dark spots on his light fur. And, as the dog’s markings indicate opposites, the dog, much like the Egyptian Anubis, will weigh the soul of the young man and remind him always on this journey that he must choose between what is good and right, and what seems easy or accomplished more quickly.

Dogs represent playfulness and are a part of our psyche that represent that which is able to be tamed and domesticated, able to be part of society. This may speak to the fact that the Fool is not thinking for himself so much, but dreaming a collective dream.

An eagle flies before the sun. The eagle is a symbol of wisdom. High flying, the image of flight links the Fool to the character of Icarus, perhaps he too needs to learn humility in order to succeed. The eagle also represents that which meets the soul at death and transcendence when he meets the world and becomes one with all at the completion/beginning of the journey.

Eagles and other falcons are spirit messengers, and the sun represents The Solar Logos, which means the Word of God. The sun is the giver of life to all things as evident by the rays of light radiating from it. The eagle flying in front of the sun indicates he is the messenger to bring the Word of God to the young man, for God uses natural means to deliver his messages whether they are by thought, or implicated by the things natural to this world such as the horn.

Nothing that arrives before us in our lives is an accident or a coincidence even if it seems out of place, as the horn indicates. We must be aware and take action in order to receive guidance from the unseen world and therefore meet our destiny or solve our current problems.

The horn that lies at his feet is a symbol of plenty, of warning and of communication. This represents tools that the Fool will need in his journey. The horn is connected to the suit of discs in the tarot, which represent the energy of the earth and of wealth. The Fool will need the tool of communication in his journey to transmit his emotions and intent to others he meets on his way. The warning aspect of the horn may speak to hardships ahead, echoed in the tower-like turrets of the castle behind him and the high flight of the eagle.

The emphasis in this card is on the subjective things waiting to guide him. However, in order to use them, he must first connect with them. A symbolic action is required of him. He must literally pick up the horn on the grass in front of him, for the horn symbolises the ability to communicate with the unseen world even as God’s angelic hosts use horns – or trumpets – to communicate with man. That he has things in the natural world to help in this quest to communicate is evident with the dog, eagle, and the sun.

Considering the story of Camelot, it is the innocence and purity of the Fool following his intuition and guided by the unseen world who can bring to fruition to the ideals of truth, justice, freedom, chivalry, and community inspired by the Kingdom of Camelot.

A bright sun shines forth in the sky. The sun represents that which gives life to all beings on earth and allows the fool to be at all. It is a symbol of gregarious outgoingness, which dovetails with the Fool’s happy go lucky demeanor. The sun will also come later in the major arcana, and so its appearance foreshadows the hero’s potential to shine forth, although at this point he has barely exited his cave/womb.

At the beginning of the Fool’s journey, he is not aware of what he travels towards, for it is still hidden from him. He has just left his old life behind in order to embark on a new journey. He has stepped through a portal at the entrance to what might appear to be a cave, leaving his home behind. Beyond the entrance to the cave/womb is a swirl of mist obscuring a castle. A cave is a symbol of hiding. Something that one emerges from when one is ready to confront life head on. The cave can also be a symbol of the womb, the yin space that we all emerge from.

“In my father’s house there are many rooms.” This bible quote speaks to the many realms of consciousness. In psychological terms, this may represent the questioner’s family background and the reservoir of experience and template from which they can draw to guide them on their path.

Walking out of a celestial world and into the harsher reality of 3D, he’s looking for adventure and a new life. Yet we can see that the world he left behind still lives. In fact, it thrives, as indicated by the lush foliage over the entrance of the doorway to another realm.

There are vines growing above the top of the entrance to the cave. They symbolise the new growth of the Fool’s life, but a vine cannot grow on its own; it needs a structure to support it. The Fool must have a structure of philosophy with which he can make meaning of the world. In the background, tall redwood trees are growing. They symbolise stability, life, and longevity. They are the guides and evidence of what has come before so that the Fool can have hope. If a mere seed can become a tree, what might the Fool develop into?

There is green grass growing beneath his feet. This speaks to springtime and beginnings, a sense of vibrant renewal and general newness … Easter. The field is dotted with flowers. The flowers are brightly coloured and may represent hopefulness and playfulness.

In the distance, a hill can be seen. This symbolises the mountains that are in the Fools’ future. He must be ready to face difficulty and perhaps hardship as he sets forth. He wears sturdy boots for his journey and has a carefree look about him.

Successful resolution of issues – or completion of this journey –  is possible since we see groups of twelve represented in the image. The number twelve is the symbolic representation of perfection and authority – of completion, such as Jesus’ 12 disciples, 12 zodiacal signs, and other demonstrations of this number. The Fool has the authority of the ethereal world to move towards what lies in his subconscious mind and to bring to completion his destiny or successful resolution of his current challenge.

The 12 living things to his right indicate this since they are in the direction he journeys: FOUR flowers – FOUR clumps of bushes on ONE tree, ONE dog, ONE eagle, and ONE sun. There are 12 flowers on his left: where he will end up… for his number is zero – a circle – which demonstrates the end is the beginning and the beginning is the end – one leads to the other.

His journey will end successfully since the Fool card’s number is 0, which is representative of the circle of life. This young man will finally realise that what he originally sought was within him from the beginning, but not available without first having searched for it with all his might …. believed with all his heart …. and listened with all his soul while keeping that connection to spirit. This is the journey of the Fool.

His journey will lead him to where his consciousness already is – he must simply follow his intuition and keep listening to the Word of God on his journey and travel with faith in that authority. He has all the resources he needs as indicated by the bundle of provisions he carries.