Goddess Lakshmi – From Dark to Divine 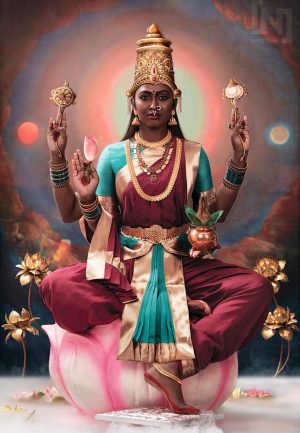 Goddess Lakshmi – From Dark to Divine

Draped in red saree, bedecked with gold ornaments, seated on a lotus, pot in hand. Flanked by white elephants, the image of Lakshmi adorns most Hindu homes and business establishments. But her journey to wealth and riches is never a direct route. This is the story of Goddess Lakshmi – From Dark to Divine.

Who is Goddess Lakshmi?

Lakshmi is the goddess of wealth, fortune, power, luxury, beauty, fertility, and auspiciousness. She holds the promise of material fulfillment and contentment. She is described as restless, whimsical yet maternal, with her arms raised to bless and to grant. For centuries Hindus have invoked her thus:

Beautiful goddess seated on a chariot, Delighted by songs on lustful elephants, Bedecked with lotuses, pearls and gems, Lustrous as fire, radiant as gold, Resplendent as the sun, calm as the moon, Mistress of cows and horses — Take away poverty and misfortune, Bring joy, riches, harvest, and children.

Stories of Lakshmi first appeared in the epics Ramayana and Mahabharta, which were composed between 300 BC and 300 AD, a period that witnessed the waning popularity of Vedic gods and the rise of gods who offered moksha such as Shiva and Vishnu.

Gods and demons fought over her and both strove to churn her out of the ocean of milk. As folk heroes such as Rama and Krishna were viewed as incarnations of Vishnu, their consorts Sita, Radha, and Rukmini became increasingly identified with Lakshmi. In the Harivamsa, appendix to the Mahabharata, Manmatha, the god of love, lust, and fertility, was described as her son.

The information about Lakshmi grew more complete in the Puranas, chronicles of gods, kings, and sages that were compiled between 500 and 1500 AD. In them, the goddess came to be projected as one of the three primary forms of the supreme mother-goddess, the other two being Sarasvati, the goddess of knowledge, and Kali or Durga, the goddess of power.

Lakshmi was visualised both as an independent goddess and as Vishnu’s consort, seated on his lap or at his feet. Prithvi, the Vedic earth-goddess, became Bhoodevi in the Puranas and a manifestation of Lakshmi. In south India, the two goddesses were visualised as two different entities, standing on either side of Vishnu, Bhoodevi representing tangible wealth while Lakshmi or Shridevi representing intangible wealth. In north India, the two goddesses became one.

As the Vedic gods waned into insignificance around the fifth century BC, two gods came to dominate the classical Hindu worldview: the world renouncing hermit-god Shiva and the world-affirming warrior-god Vishnu. Lakshmi was briefly associated with Shiva before she became the faithful consort of Vishnu-Narayana, the ultimate refuge of man. With Vishnu, she was domesticated. No longer fleet-footed, she sat demurely by his side, on his lap, or at his feet.

The association with many gods has led to Lakshmi being viewed as fickle, restless, and independent. Sociologists view the mythology of Lakshmi’s fickleness as indicative of her cult’s resistance to being assimilated with mainstream Hinduism. Even today there is tension between the mythology of Lakshmi as an independent goddess and her mythology as Vishnu’s consort. Philosophers choose to view the fickleness and independence of Lakshmi as an allegory for the restlessness of fortune. More often than not, there are no rational explanations for fortune and misfortune. Good times come without warning and leave just as suddenly.

She Walks Among Us

What is not revealed in most of the writings about her is that Lakshmi, as with all of the other Hindu Gods and Goddesses, incarnates here amongst us regularly. She incarnates in both male and female bodies, and there is always more than one incarnation of her on this planet at any one time. There are often hundreds of people who are incarnations of Lakshmi. She is the wealthy good samaritan who uses her wealth, influence, and money to help others.

She is Vishnu’s partner. Vishnu has also incarnated here multiple times. On one occasion he was Krishna, and then Krishna incarnated again as Jesus. At a later time, he was Merlin the Magician, and more recently he was Sir Frances Bacon and then also Saint Germaine. He is also Kalki, who is here on earth at the moment.

In one of Lakshmi’s many incarnations, she lived as Mary Magdalene whose dowry alone was worth in today’s terms more than 400 million US dollars. Not to mention what she earned from investments using her own shrewd business mind. It was her money that funded Jesus’s ministry. It is true that she spent time with the demons prior to returning to the Divine. We all know what kind of work Mary Magdalene is famous for. So yes, Lakshmi’s journey is almost always one that rises from darkness to Light.

If you’d like to learn more about these things, please feel free to pick up the phone and call me on 0404000077 to make a booking for some coaching on this topic. It’s a fascinating topic which when you comprehend it fully, helps you to see life in a new light.