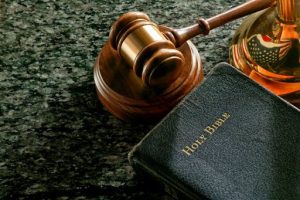 The Bible is actually a legal document and is the Highest Trust Law Book in the world. The Courts (as far as those in power think) are the real church. The Judge in a courtroom is appointed to decide which way the judgment goes. He or she is a representative of God. It is the only place on earth where judgments that impact those who are being judged are made. Our regular Sunday church ministers or priests don’t pass judgment that affects people. Only the judge in a court of law does.

The churches that we’re used to are just pretend-churches to those who are in the know about these things. If you’re a high-level Freemason you would know about this.

Lawyers and the Bible

The Bible was put together by lawyers, and they wrote it in their legal language so that they could put codes into it. When they refer to ‘scribes’ in the bible, they’re sometimes talking about Lawyers. Not always, because there exist people who are true scribes, but sometimes they are. Here’s an article on who was involved in putting together the King James version of the Bible. http://www.bible-researcher.com/kjvhist.html   Notice that Lawyers were involved?

LORD in all capitals means one thing (look up what it means to write a name in all caps – it’s a Strawman, to help you understand), Lord in upper and lower case means another, and when they write God they mean something else. Jesus usually referred to the Creator as our Heavenly Father, our Father or my Father, sometimes God, not LORD or Lord. There are definitely different meanings for the terms that they use for the one whom they want us to think is our Creator. Those who wrote the codes in the bible know that one exists and they are fully aware that He is above Lucifer, whom they know to be the prince of this world.

To comprehend the language of the coded Trust Law Book called the Bible (highest Law) you need to read it in legalese and the legal definitions of the words – eg: James 2:9 God is no respecter of PERSONS. Are you a Person…? No, you’re not. The meaning of the word PERSON is found in the Black’s Law Dictionary. Here it is:

“Legal person refers to a non-human entity that is treated as a person for limited legal purposes – corporations, for example. Legal persons can sue and be sued, own property, and enter into contracts. In most countries, legal persons cannot vote, marry, or hold public office.”

But of course, you’re not a PERSON! God didn’t create persons. He created Man. All the rest are legal fictions and are dead at law which is why they wear BLACK robes for mourning the dead in court.

Most books in the Bible have been rewritten many times. The only book that hasn’t been tampered with is Revelation. It is true that the original writings were not what we read today in the bible, but today’s laws are written into today’s bible and today’s laws are based on the codes in the bible of today. Why do they put a bible in a court and get you to swear an oath on it? Because you’re swearing your allegiance to their laws by doing so. Sure, there’s Grace in the bible too. Those who took part in assembling the Bible must allow some truth to speak through it, otherwise, the masses would see through their tricks very quickly.

If you take a King James bible into court with you, you are telling the Judge that you obey God’s laws, not man’s laws. Take one with you when and if you ever have to go to court. Swear on your own bible, not theirs. Often their one isn’t a King James bible anyway.

Read the articles of incorporation of any one of a number of churches, and you will see they are a creation of Satan. All corporate churches are franchises of the Illuminati. This is how America, Canada, England, New Zealand, and Australia have been destroyed. The corporate church is the nexus of exchange of power from the Kingdom of Yeshua to the fictional dominion of Satan. Those who run the churches have to maintain the servitude of The People to the BEAST.

When anything is registered it is moved from the jurisdiction of the land to the Sea, from life to death. It happens between the time of the nativity to the BIRTH CERTIFICATE, thus creating a slave from cradle to grave. So the people put their trust in a corporate church pastor like Chuck Smith, Greg Laurie, or Brian Houston, and these men breach that trust in the most evil and Illuminati way. These men made the work on the cross void by compelling you to serve the Beast. Their breach of trust is a commercial charge and enough cause to dissolve these corporations. Period.

When you take a King James bible into court with you, it shows the judge that you acknowledge our Heavenly Father in all that you do. Mind you, the judge doesn’t expect you to know that the bible has been coded by lawyers. The judge will see your bible in your hands and then expect that you aim to bring God into the courtroom with you. Doing so will change the dynamics because it shows that you believe that God’s laws are higher than man’s laws (which they are).

When in court, tell the Judge that you don’t comprehend man’s laws and that you only know how to follow God’s laws. Then ask for forgiveness for your mistakes. Ask the Judge to show mercy and not convict you with a criminal record. They, in fact, must show mercy. This applies in the case of disobeying a man-made law, such as driving over the speed limit in a particular area. If you have done no harm, if your behaviour has created no victims, they must forgive you and show mercy if you ask.

Symbolism of the Hammer

In a court of Law, the hammer comes down as judgment is made. Those three strikes of the hammer symbolically represent strikes of the nails into the Stavros that Jesus was placed upon. King Herod ordered this to be part of the ceremony of courts.

The Crown of the Prince of Darkness

She also wears three different coloured robes, which all have meaning. All of this is tied in with the laws that govern us today, as when it comes to the law, we have to answer to the Crown.

But Sir, I Don’t Understand!

The question one has to ask is “Whose crown are we answering to when we step into their courts?” The crown of the Prince of Darkness, not the laws of our Creator, that’s who. You only have to say that you don’t understand (stand under) their laws because you live by God’s laws, not man’s. Then just ask for forgiveness for your sins and that the judge show mercy and not criminally convict you. He must forgive you – you will be forgiven and set free. This method is far superior to all of the complex Freeman methods that I have studied in the past. However, it still requires a lot of other knowledge to make it work. It’s only through a lack of comprehension and a lack of skill and practice that all the other complex approaches that I have tried failed.

Read the bible not as a religious book but as a law book. Treat it as the comrade that it is when you step into a court of Law.