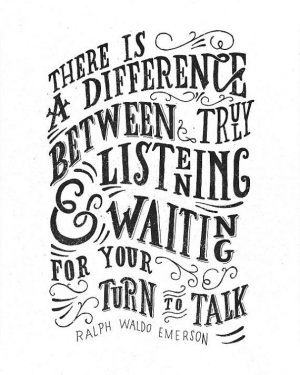 Do you know how to communicate? Do you know how to listen? I mean, really listen? Do you know when to speak and when to be quiet? Do you know how to approach people who are already talking with one another and not interrupt them but rather, join them? Most people haven’t got a clue about these things. Here in this article, I discuss good Communication Etiquette. If you are like most people, it will take some time for you to change your habits, but upon doing so, you’ll become someone who is a complete pleasure to deal with.

When a conversation is going on between two people, most people fail to hear when someone truly needs to speak about themselves. Most people spend all their time waiting for a gap in the conversation so that they can talk about their own experience of the same thing, or to twist the conversation back to talking about themselves. There’s a difference between when two people are sharing similar experiences and when one of those two needs to talk to be heard. They don’t want someone to compete with them regarding what it is they need to talk about in that case. They want to talk and be heard.

Most unprocessed, undeveloped people want to take part in the Me Too Syndrome. They want to talk about how they are having or have had a bigger, better, more dramatic experience of the same thing. They can’t wait to bring the spotlight back onto themselves, so wrapped up in their own egos that they fail to hear when someone just needs to talk to let out what they are feeling so that they can process it.

It doesn’t take much to be a healer. Many people claim that they are healers, but they couldn’t heal if their life depended on it. All that it takes to be a healer is to listen to others. Everyone on this planet could be a healer if they learned to actually listen and hear what others need when they are having a conversation with them. Sometimes it’s just an exchange of information. Other times, the person needs to talk about their life and have someone acknowledge what they are saying.

My old teacher used to talk about how we would only develop fully once we knew how to have “tea with Hitler.” Now, what he meant by that was “could we sit with the man and listen to him speak, and not interject with a judgment of him or with advice for him, and not override him with talk about ourselves?”

We should try to get underneath the man in our feelings and allow him to be who he is and allow him to talk about himself as much as he likes. Try not to squirm or fidget but to sincerely listen to the man. We are not to let our minds go off on another tangent. We are to give the man our full concentration and really support him energetically. That is how you learn how to listen and that is how you become the magical healer who doesn’t need a sign on the door advertising your services.

I’ve been spending time with a community group who all seem to be afflicted with the same problem. I’ll be sitting having a conversation over dinner with one of the other attendees at the group. Then, someone else from the group will come along and crash our conversation. He or she will start talking directly to my conversation-pal without so much as a “Please excuse me”. This type of behaviour is rife in our community. I can’t tell you how many times it has happened in the last 12 months, it’s been so many.

Now, there’s a community leader in this group with whom I’ve spoken to about this. However, nothing seems to have been mentioned and nobody’s behaviour has changed. These basic communication etiquettes are an intrinsic part of love and respect. Love and respect are Graces. They are not the only graces, but they are indeed two of the most important Graces. The community group’s aim is to teach people to be better human beings, along with other things. Considering that, you would think that their leader would try to teach his group about Communication Etiquette. Perhaps he himself doesn’t realise that this is what he needs to do. Perhaps he doesn’t even know this etiquette to be able to teach it to others. All I can say is that he is nowhere near the level of teacher that I’m used to.

So, if you want to become the magical healer who can heal others simply by being yourself and going about your daily routine, make learning to truly listen to others a high priority on your list of personal skills. Don’t compete with them and tell them how you’ve had the same experience. Learn to discern when it is appropriate to have a sharing of experiences and when it isn’t.

Also, don’t drift off in your mind and disconnect from the person whom you’re talking to. Stay present. Then, if you’re in a social gathering, do not rush up to people and interrupt them while they are talking. Stand close, but wait. Wait until there is a gap in the conversation and then say, “Excuse me, mind if I join you?”. That is how you show respect for the people whom you are wanting to talk with. That is also how you grow spiritually and emotionally.