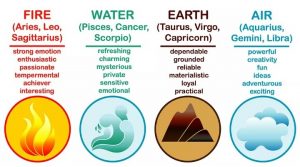 Groups of signs in astrology share certain characteristics that are classified according to four earthly elements – fire, air, water, and earth. It helps explain why some signs are more compatible than others. Here’s a list of the Elements in Astrology.

The Fire signs are Aries (March 21 to April 19), Leo (July 23 to August 22), and Sagittarius (November 22 – December 21). Fire people are leaders, dynamic. They light up everything around them. Because Fire needs Air to exist, Fire signs are most compatible with the Air signs. Water is anathema to Fire and a Water person could try to dampen the dynamism and enthusiasm that defines Fire.

The Air signs are Aquarius (January 20 to February 18), Gemini (May 21 to June 21), and Libra (September 23 – October 22). These are the idea signs, the air that breathes a spark into a flame. They can’t be tied down. They require freedom of movement and thought.

The water signs of Cancer (June 22 to July 22), Scorpio (October 23 to November 21), and Pisces (February 19 to March 20) are characterized by the phrase still waters run deep. They’re emotional and sensitive, given to deep thoughts and conversations. Just as water can blur an image or hide secrets within its depths, so do Water signs have secretive emotions and abilities. The Water signs are most compatible with Earth signs.

The Earth signs are Taurus (April 20 – May 20), Virgo (August 23 to September 22), and Capricorn (December 22 to January 19). They are stable and consistent. While not as compassionate as the water signs, they are nonetheless nurturing. They can be rigid (stick in the mud) and easily stuck in routines. They are most compatible with Water signs, as Water is necessary for the Earth to properly nurture growing things. Earth helps Water contain itself, which is often necessary for survival on the planet.