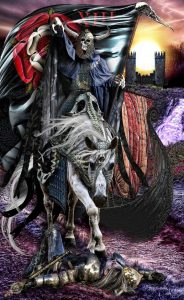 Together with the Devil, this is probably the most feared card in the deck, but it shouldn’t be. It hardly ever points to physical death. The Death Card meaning usually suggests merely an ending of something of significance. Without endings, we don’t have beginnings, so one can look upon this card as a card of new opportunity rather than as a card of loss.

Whilst The Death card can represent rather shocking or unexpected events or changes, they usually clear the way for a brand new start and a greater value for life itself. It’s a time of transformation, but again, the flip side can represent stagnation and refusal to change.

negative associations with this tarot card: stagnation, loss of opportunity, loss of friendship, fear of change.

Without a doubt, it is this card that causes the most fear in a reading and yet it rarely, if ever, symbolises actual death. More a time of absolute endings and absolute beginnings whilst The Death card can represent rather shocking or unexpected events or changes, they usually clear the way for a brand new start and a greater value for life itself out with the old and in with the new, a time of transformation is another way of looking at this card negatively there isn’t much difference, other than you may have a greater sense of fear and dread. when this card appears it’s time to show what you’re made of another negative aspect of The Death card is stagnation, resisting change when change is essential which may lead to lost opportunities. 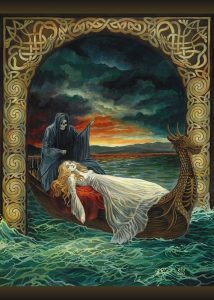 Death is ruled by Scorpio, the sign of “sex, death, and taxes.” The rune is Eihwaz. 13 is the number sacred to the Goddess because of the thirteen moons in a year. In the Rider Waite image that you see below, the banner that Death carries has a black background, indicating an absence of light. The white rose, on the other hand, indicates beauty, purification, and immortality. Death is portrayed as a skeleton because the bones are the part of the body that survives death. The armour that he’s wearing shows him to be invincible, unconquerable. Indeed, no one yet has triumphed over death. Notice that Death really does ride a white horse! White is the colour of purity. He is the ultimate purifier. All things are reborn fresh, new, and pure. 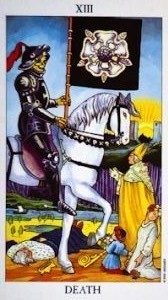 Notice even the bishop paying homage to him. All sectors of the human race are represented here, men, women, and children. Death is not a respecter of age, race, or gender. Notice the rising sun in the background. That’s the sun of immortality. Death is really just a change, and the sun represents that. The sun appears to die every night, but is reborn fresh and new every morning.

The two pillars are guarding the gateway to the sun, symbolising the knowledge needed to gain immortality. We keep coming back to this plane because we just don’t get it and we have to keep coming back and learning more until we do. Then we can graduate and pass beyond the sun into something better. The boat on the water in the background is the ferry that ferries the souls across the River Styx. The background is a neutral grey, again showing Death’s impartiality.

This archetype teaches you to let go of outworn and outgrown ways of life and move forward. Death is a clearing away of the old to make ready for the new. This is a perfect card to use to kill a bad habit, such as smoking.

Transformation. You need to profoundly transform yourself or a situation. If you cannot transform the situation, you must be willing to let it go. What has outlived its time must pass away to make way for new growth.

Death! A powerful energy indeed. Who can look at the dark, skeletal figure on Card 13 and not feel uneasy? Here we see the face of our deepest fear- our greatest unknown. We recoil from Death because we think of it as annihilation. In the Tarot (and in life, I would suggest) Death is not a permanent end, but a transition into a new state. Life is eternal in its essence, if not in its form. To grow, to move, to live – we must “die” to the old to give birth to the new. It is a truism in Tarot work that Card 13 rarely has anything to do with physical death. A responsible card reader never interprets Card 13 in this way because this view is too limiting. Death is not something that happens once to our bodies. It happens continually, at many levels and not just in the physical. Each moment we die to the present so the future can unfold. In readings, Death often represents an important ending that will initiate great change. It signals the end of an era; a moment when a door is closing. At such times, there may be sadness and reluctance, but also relief and a sense of completion.

Death also suggests getting down to basics. Dying has a way of making you concentrate on what’s important. This card reminds you to cut out the unnecessary. Death can also mean you will experience an inexorable force. Death is inevitable, and sometimes there are events that are inescapable as well. When these moments occur, the best approach is to ride your fate and see where it takes you.

A habit or pattern has become difficult to break and you alone have not been able to correct it. You have no recourse now but to step aside and let the Higher Powers move in and lead you out of the difficulties. You must accept this ‘death’ in whatever form it takes if a resurrection is to occur and the situation restored to its rightful or proper condition.

You will get the rare chance to know the clear, nurturing, supportive, and heartfelt emotional exchange that is the mark of a good romantic, familial or business relationship. Few things are more valuable.

Death contains the elements of sudden and unexpected change. Though the immediate thought is toward the negative, an end need not mean failure. The loss could be unexpected surprises ending a period of turmoil or problems. You feel you can no longer go along with the status quo and want things to change radically. Many changes are going to take place and in three to six hours, days, weeks or months a new direction will emerge and the ‘dead’ shall rise again.

The Death card is probably the most feared and misunderstood of all the cards in the Tarot deck. In general, people tend to take the meaning of this card far too literally and fear that the indication is for the death of either themselves or others. Relax! The card of Death can be one of the most fruitful and positive cards in the deck. Death is a symbol of the ending of some phase or aspect of our lives that may bring about the beginning of something far more valuable and important. If we encounter this card in a reading it may be an indication that we need to learn to let go of unhealthy attachments in our lives to pave the way to a fuller, more fulfilled life of deeper meaning and significance.

The Death card is a card of change, a card of transition. We are transformed by the death of old ways of thinking and by releasing ourselves from clinging attachments that restrain our further growth. The Death card represents the clearing of the old to usher in the new and therefore should be welcomed as a positive, cleansing, transformative force in our lives. “Unless the seed should fall to the ground and die, it shall never bring forth fruit” should be the guiding spirit under which this card is understood. The death and clearing away of limiting factors can open the door to a wider, more satisfying experience of life. What changes are you experiencing? What phase of life is passing away to open you to a richer experience? Or, more actively, what can you do to bring about positive change in your life? Notice, the sun is setting in the distance. Or is it rising?

Death of the old is necessary for the new to emerge. The old is like the compost heap, full of rich experiences from which new forms emerge. If we resist changes we may experience pain, emotionally and physically, but if we exercise our creative imagination and visualise a new, more peaceful, at-ease self, a self that is in a better position than before, then we can move more easily through the unknown fathoms of death and let it take us from constrictive patterns of the past to emerge like the phoenix soaring upward. Death is getting down to the bare bones. It asks us to look at our true inner yearnings for emotional and spiritual peace. It asks us to be reborn through our union with a Greater Power.

This card does not presage a physical death but, like the harvest, marks the end of a cycle in which the seeds of a new one are sown. As the earth undergoes a yearly cycle of death and renewal, in our lives we undergo many such cycles. The Death card marks the end of phase of your life that can never be recaptured. This does not necessarily have unpleasant connotations – the birth of a child will mean a radical change of lifestyle, as might a marriage or a change of residence, but nevertheless, the old way of life is dead and the loss must be acknowledged, come to terms with, and in some way mourned.

Temporary, stagnation, death of political figure, or upheaval. Changes for the worse.

If you are having trouble dealing with the change, place a bunch of newly cut flowers in a vase. Over the next thirteen days observe them as they wither and die. Take them to a burial site and whisper these words as you cover them with earth, “Old flowers, New flowers, release my soul, renew my powers.” Let go of your pain and walk away.