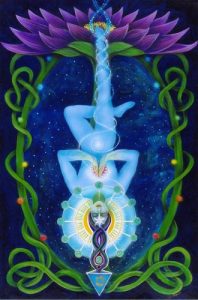 The Hanged Man Card Meaning usually represents a time of feeling in limbo, being stuck or being prevented from moving forward. He’s usually depicted hanging upside down with his hands tied – which is just what it feels like!

We need to remain flexible and willing to let go of things; it’s probably a time for sacrifice.

The hanged man card is basically saying, don’t sweat it, take some time out and be patient.

The Hanged Man symbolises self-sacrifice, whether that be material or emotional, an ability to adapt to changing circumstances this card can represent a time of limbo or a pause in life until something or perhaps someone is given up for greater gain.

The Hanged Man can represent ill health, stress and anxiety, this is a time for patience and not worry this card represents a trial of passage and hence, the self-sacrifice aspect of this card has spiritual overtones negatively. The Hanged Man symbolises selfishness, the use of emotional blackmail by playing the martyr. Another negative aspect of this card is that a weakness of will may lead you in a wrong direction, materially, emotionally and lead to missed opportunities. 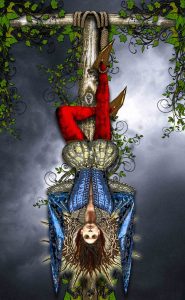 The Hanged Man in some decks is Odin, who hung on the world tree for nine days and received the runes. The tree is Yggdrasil, the living World Tree (notice the living branches), rooted in the underworld and supporting the heavens. The number 12 is a higher octave of the number 3, careful planning and orderly growth leading to spiritual development. 1(beginning)+ 2 (the reasoning force)= 3 (the product of rebirth). The rune is Nied. The ruling planet is Neptune, the planet of self-sacrifice and idealism. He is hanging on the tree of his own will. Notice the serene expression on his face. His legs are bent to form a cross, while his arms form an inverted triangle. This is an alchemical symbol meaning overcoming the personality and transmuting the lower passions into pure spiritual gold. Red pants represent human passion and the physical body. Blue coat for knowledge. Yellow (gold) shoes to represent his high ideals. The halo showing spiritual attainment, with the grey background suggesting invisibility (a good reminder to not flaunt your spirituality). This is the archetype to meditate on to help break old patterns of behaviour and bad habits that restrict you.

Suspension. You need to get in touch with why you feel restricted or stuck. The suspension of progress may occur if learning reaches a plateau. If things are seen from a new perspective, change can occur. You are not being punished unjustly. The Hanged Man is one of the most mysterious cards in the Tarot deck. It is simple, but complex. It attracts, but also disturbs. It contradicts itself in countless ways. The Hanged Man is unsettling because it symbolises the action of paradox in our lives. A paradox is something that appears contradictory, and yet is true. The Hanged Man presents to us certain truths, but they are hidden in their opposites. The main lesson of the Hanged Man is that we “control” by letting go – we “win” by surrendering. The figure on Card 12 has made the ultimate surrender – to die on the cross of his own travails – yet he shines with the glory of Divine Understanding. He has sacrificed himself, but he emerges the victor.

Self-surrender to higher wisdom. A reversal of your usual way of life. Conquer material temptation. A period of indecision is indicated. Gift of prophecy. Giving up of something to gain something better.

Sacrifice and surrender will be applied to changing circumstances. These sacrifices will result in the obtainment of your desires later in life. Decisions that need to be implemented will be postponed. You’ll have repeat clients, and some financial increase or profit, but will be waiting for something to happen or turn up, and will fear the work you’re doing has little value, or that you won’t be able to sustain yourself in the future. You will soon spend time in the home of a relative or dear friend that you haven’t seen in a while and it will be very pleasant.

The Hanged Man appears to be a captive, suffering an undeserved punishment under the power of an unknown malicious force. This initial impression generally leaves a reader with the uneasy feeling that the card portends disaster or trouble. However, when viewed more closely, the positive aspects of the card become more evident. The young man bears a peaceful countenance upon his face, much more the look of a man content with his fate than at the mercy of unknown powers. He also has a bright yellow halo around his head, suggestive of his purity and innocence. The Hanged Man is a willing victim, someone who has chosen the path of sacrifice to accomplish a higher goal. He hangs upside down upon a cross, like St. Peter who was crucified upside down for his witness to the message of Jesus.

The Hanged Man represents the willingness to forsake the temptations of instant gratification for a higher cause, and because of his willing sacrifice he accomplishes the goals he has in his heart. When we encounter the Hanged Man, we should consider areas in our lives where we may need to act in a more selfless manner either for the benefit of others or for the fulfilment of our own deeper needs. In contrast, we may need to examine our life for areas in which we are giving too much to others at the expense of our own mental and spiritual well-being. What emotions does the image of the Hanged Man stir in you?

This card represents self-denial, changes in fortune, or perhaps your patience and endurance will be put to the test. It means that when you come face to face with the reality of the situation in which you are in, you find something else which will prove of greater value to you. It may be that you have to sacrifice your previous beliefs or even way of life, but it is a time of renewal and your life will go forward.

Faith. Reversal of thinking. Heart about head. Escapism or inspiration. Letting go. Spiritual breakthrough. Looking at things from another viewpoint. Need to relax. Dreaminess. Unreality. Affirmation: “My heart is a fountain of peace. I bathe myself in Divine Love.”

When this card is reversed you are involved with a nebulous, evasive individual who could, at worst, have a drink or drugs problem, but is, at best, unable to give you what you need or want. While indisputably romantic and sensitive, your partner remains elusive about lasting commitment. This person is unlikely to be ready for a serious relationship, do not be misled, for you will only receive unhappiness if you persist. Sometimes The Hanged Man signifies a lover for whom you must wait patiently. When the time is right you will be ale to get to know this person more intimately.

Preoccupied with yourself. Stop it. Resistance to spiritual teachings. Arrogance. Efforts on projects are wasted. Loss of something you want or need.

The word Yoga means Union. Try the following yoga posture called the bow. Lie face down on a mat or rug. Reach behind you with both hands and grasp your ankles. Slowly raise your trunk and legs at the same time as high as you can. Hold this position for fifteen seconds. The flow of energy circulating through your body will deduct and focus your mind.