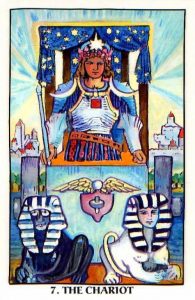 Here is the Chariot card meaning: Lots of conflict ahead, but it’s all going to be all right in the end! The Chariot is usually pulled by 2 horses that appear to go in separate directions – a kind of pulling apart, hence the conflict. There’s lots of energy with this card though, it’s all about dramatic movement and change. On the flip side, there’s plenty of room here for overconfidence and arrogance.

The Chariot symbolises conflicts ending in victory, so advises sustained efforts if in a current struggle or facing one, as you will win in the end

Travel and change is indicated by The Chariot as well as representing a vehicle – if in a favourable position it could mean you’ll get that car you’ve been wanting!

Negatively The Chariot can mean that either you or someone of influence around you is being a bully, arrogant and selfish 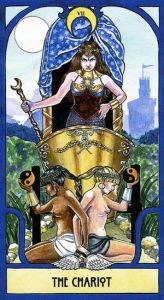 The Chariot is the last card in the first septenary. The laurel and star crown indicate the highest attainment of man in spiritual evolution. The number 7 is the sacred number, also indicating spiritual attainment. The sign associated with this card is Cancer, and the rune is Raidho, indicating movement and travel. The canopy of 6-pointed stars represent the celestial influences at work in this card. The crescent moons on the man’s shoulders are outward facing to refer to the formative world. The symbols on his tunic are alchemical symbols, representing the spiritual transformation of man. The square is earth, a sign of strength of will. On the chariot, itself, are wings representing inspiration and the Hindu sign of the union of positive and negative. The black and white sphinxes have the same meaning. You’ll notice the Charioteer holds no reins, just the wand from the Magician card. He controls through strength of will in the same way the Magician does. The city is behind him, indicating he has turned his back on civilisation and materialism, to seek spiritual matters.

The Chariot represents the positive aspects of the ego. A healthy ego is one that is strong and self-assured. It knows what it wants and how to get it. Sometimes we can get annoyed at someone whose ego is too healthy, but we often turn to that person to lead us through difficult moments. We know he or she won’t be wishy-washy. In readings, the Chariot often appears when hard control is or could be in evidence. At its best, hard control is not brutal, but firm and direct. It is backed up by a strong will and great confidence. The Chariot can mean self-control or control of the environment. This card also represents victory. There are many types of wins; the Chariot’s is of the win-lose type. Your success comes from beating the competition to become Number 1. Such moments are glorious in the right circumstances.

This card represents conquest. Success, victory through hard work. A well-balanced life. Triumph over ill health and money difficulties. An ability to resist temptation indicated. Control over forces of nature.

Trouble and turmoil will be conquered through your confidence and control. Any success will be a result of applying these factors to the situation. You will wonder if you should pursue a plan or continue a project but will be driven to do so, and a perplexing dilemma will be resolved for the time being. You could also have an opportunity to be filmed or taped, or to work with film or tape. Plans or schedules will be discussed with your relatives, but you’ll feel pressured by time or other commitments.

Determination. You need to focus completely, seize the time, get in the race, and win it. Cultivate the ability to withstand the rigours of what is required. Striving towards your goal can be as satisfying as attaining it. You need to be strong.

You will have to use the strength of your will to overcome obstacles. You need to be determined, self-disciplined, and hard-working. If you are, you will triumph over any difficulties or any people who are trying to limit you. This struggle will ultimately temper you and make you stronger. This is an important card for disabled people, advising that a very successful life can be built up within the limitations that have been put on you; you only have to want it enough.

On a deeper level, the chariot is telling you that you must come to terms with your own aggressive impulses. Aggression is part of human nature, part of your innate survival mechanism. Aggression cannot be simply suppressed; to do so will only turn it inward on yourself, leaving it thereafter to manifest in the form of physical illness. Aggression can be very destructive, but it is also a powerful energy that can be channelled creatively.

You are collapsing under pressure and losing your self-control. Your aggression is being channelled in the wrong direction – wildly at other people, at fate, at circumstances. This is a complete waste of your energy and resources. Redefine your aggression as determination and willpower, stop clinging weakly to unrewarding ideas, habits, people, and objects, and move forward.

Life is unbalanced and passions are uncontrolled. There is a victory but it is reached by cheating or unethically. A journey or trip planned is postponed. Failure. To lose at the last minute something otherwise in your grasp. Sudden collapse of plans. Overwhelmed. Failure to face reality.

To gain aid and protection in your race, relax, close your eyes and see a strong white light surrounding you, making your body appear radiant with energy and physical health. Feel yourself strengthened both inside and out. Visualise yourself accomplishing your goal and accepting the adulation of your supporters. Know that your will power and determination will lead you to victory. Use this enchantment daily to increase your resolve.