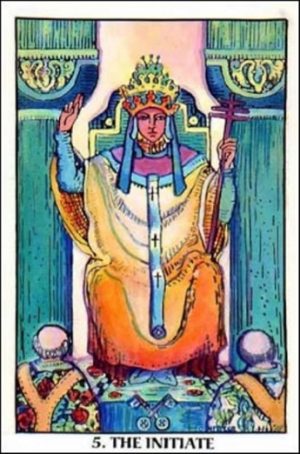 The Hierophant Card Meaning: sometimes called the High Priest, he’s the counterpart to the High Priestess, but represents the wise man rather than the wise woman. He’s a great teacher, adviser, and counsellor and will give good advice even if it’s a bit conventional in spirit. He can represent the feeling of having one’s creativity stifled and is not the favourite card of the deck for the more maverick and unconventional of us!

The Hierophant is a symbol of moral law, a wise and capable advisor, a practical instructor and spiritual guide

The Hierophant may actually represent a teacher, priest or advisor but is more likely to symbolise moral lessons to be learned from events

This card can be an indicator of marriage or a desire for marriage, as well as point to legal resonsibilities and official documents

Negatively The Hierophant can symbolise feeling stifled by others wanting you to conform to their expectations rather than being yourself, and not wanting to take more traditional options. However there is an upside to this negative aspect of the card that can mean making your own rules.

Another negative aspect of this card is that he can represent confusion, a crisis of faith or self belief that results in disorderly conduct. 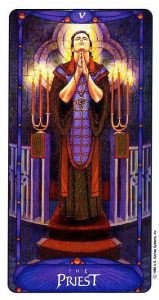 The Hierophant is known as the High Priest in some decks. He is the masculine counterpart to the High Priestess. He is also known as Chiron, the Pope, and the Shaman. The crown he’s wearing has three tiers to represent the three worlds. His right (power) hand is raised in benediction, the same hand the Magician has raised. In the Magician, he was taking raw power from the Universe and manifesting it on the material plane. In the Hierophant, that power is channelled through society. (As in the religions of the world). The triple sceptre is another symbol of his dominion over the three worlds. The crossed keys represent a balance between the conscious and subconscious minds. These are the keys that unlock the mysteries. The Hierophant is ruled by Taurus.

On the Heirophant, we see a religious figure in a formal church setting. He is wearing thee elaborate vestments of his office. His task is to bring the two initiates into the Church so they can take up their appointed roles. Besides churches, there are schools, clubs, teams, companies, and societies. The Hierophant represents all of these because his realm is structured groups with rules and assigned roles. Such environments emphasise belief systems -facts, rules, procedures, and ritual. Members are rewarded for following conventions. They develop a group identity.

The Hierophant, or the Pope, is similar to the Magician in that he represents a link between ourselves and the divine. The role of the Pope is traditionally that of the mediator between God and mankind, the high priest on earth. As such he represents the spiritual teacher who helps us come into contact with the divine. Unlike the Magician who simply points the way, the Hierophant is a trusted guide, one who will take us by the hand and lead us to our spiritual goal. He also represents tradition, the orthodox, organised methods of nurturing spirituality.

Regardless of your religious background, the Hierophant represents the spirituality you were taught from childhood, the religious traditions which are your heritage. The darker side of this card can represent authoritarian control and domination of religious expression.

The Hierophant is also called the high priest or pope. He has the wisdom to provide good counsel and advice. The card represents religious matters also. Want to establish a deeper bond with someone or to unbind the bonds that block, restrict, or keep you from having what you want. It’s better to endure suffering or abstention than to be in a position where you’ll have to compromise yourself or your values.

You need to be a teacher who passes on the wisdom of the past. To do so, act sure, serene, and merciful as you learn and teach proven techniques and traditions. A spiritual practice requires study. Except in rare cases, every human being grows and develops within a culture. We learn by living with others. The Hierophant represents such official learning, especially in groups. A Hierophant is someone who interprets secret knowledge.

The Hierophant is one of three cards that focuses on the group. (The 3 of Cups and the 3 of Pentacles are the others.) In readings, the Hierophant often represents learning with experts or knowledgeable teachers. This card also stands for institutions and their values. The Hierophant is a symbol of the need to conform to rules or fixed situations. His appearance in a reading can show that you are struggling with a force that is not innovative, free-spirited, or individual. Groups can be enriching or stifling depending on circumstances. Sometimes we need to follow a program or embrace tradition, other times, we need to trust ourselves.

This card indicates someone is conventional. They have a need to conform and be socially approved. Usually, they are dependent on society’s thoughts, but at the same time, they have the ability to build their own path if they believe it is the right way. They prefer alternative religions.

All things that are righteous and sacred come with this chosen card. (Marriage, alliance, captivity, servitude, mercy and goodness, inner conscience and outer conscience.) This card represents wisdom, intelligence, asceticism and inspiration. Sound and trustworthy advice will be sought and given. This can also mean receiving and accepting, blessings, guidance and healing. Good intentions and discipline are also required.

Exploring the spiritual world, one who actively seeks answers to philosophical questions, a quest for meaning in life, a desire for spiritual knowledge. He represents the part of us that reaches “upward” toward Spirit. The spiritual teacher within.

A spiritual teacher. “Pontiff” means bridgemaker. He represents gateways to a higher consciousness reached in a ritualised manner. A bridge or channel or medium to a higher experience/plane. He teaches that which can be learned by word and example. The Pope is orthodox and directs the intellect to its highest goal.

He could appear as a psychotherapist, a wise counsellor, a priest, or spiritual mentor to whom we would turn for comfort and help. An authority, a kind and generous mentor who nurtures a spiritual awareness. Learning new skills from a helpful teacher. The keeper of an orthodox faith. He represents an institutionalised means for access to the sacred. The carrier and transmitter of ancient wisdom and religious teaching. The great upholder and caretaker of tradition. A teacher who has mastered his particular discipline. Transmission of authority through established lines or schools of empowerment.

The belief system that helps one deal most comfortably with the unknown. The Hierophant encourages one to explore the framework of a religion or doctrine or belief system. Expertise in ritual activity, ceremony, and life-cycle rites. A high degree of learning or education. Insight and illumination. Wisdom.

The card of tradition. Following established social structures and traditions. Concentration on ritual, ceremony, the trappings of religion. A need to honour some tradition in your life or maybe start some traditions of your own if you have none. Exploring your spiritual heritage.

In the positive, the Hierophant is revered for his compassion, blessings, and understanding. Positively influences the spiritual outlook of many persons. Perhaps a facilitator, who is interested in helping people connect with their spiritual side instead of trying to force narrow-minded beliefs on his/her followers. He opens the pathway to wisdom and insight for others.

Ritualism. Mercy. Kindness. Forgiveness. Inspiration. Compassion. Servitude. Inactivity. Timidity. Overt reserve. Captivity to one’s own ideas. Tendency to cling to ideas and principles even after they are outdated. Conformity. A religious or spiritual leader.

In the negative, societal, or group pressure. A run-in with authorities. Conflict with a parent or critical figure. A know-it-all. The Hierophant represents the repressive aspects of a too rigid orthodoxy. He rules with an iron hand and becomes inflexible. Forbids direct access to holy wisdom. Self-righteous morality. Persecutor. Skilled manipulator. Religious prejudice. Religious oppression. A cult leader.

Open to new ideas and thought. Do not become overly superstitious. Unconventional. A need to be socially approved and accepted. An extremely conservative person.

Place five flat stones in a cross – one for each direction and one in the centre. Sprinkle salt water in the middle saying “I concentrate this sacred space and nothing but love shall enter in. I call forth all the powers of the one spirit to charge and attend this space.” You may now use this “church” you created to establish spiritual practices of your own design.