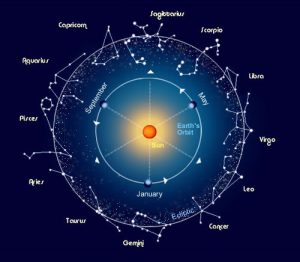 The Babylonians are generally acknowledged to have originated the practice and science of astrology. Their astrological charts enabled them to predict the recurrence of seasons and certain celestial events. So, in the beginning, and for more than 2,000 years, astrology and astronomy were the same science. Here we discuss the Origins of Zodiac Astrology.

Babylonian astrology was introduced to the Greeks early in the 4th century BCE and, through the studies of Plato, Aristotle, and others, astrology came to be highly regarded as a science. It was soon embraced by the Romans (the Roman names for the zodiacal signs are still used today) and the Arabs and later spread throughout the entire world.

While earliest astrology was used to bring a sense of order out of apparent chaos, it was soon employed to predict weather patterns, primarily for agricultural purposes. It was eventually widened to include forecasts of natural disasters, war and other events in affecting the human condition. Once success in these fields was established, it was a natural evolution for astrology to be used as a means for advising for kings and emperors and, in time, the population at large.

The word ‘zodiac’ is derived from the Greek word meaning circle of animals. The zodiac is believed to have developed in ancient Egypt and later adopted by the Babylonians. Early astrologers knew it took twelve lunar cycles (i.e., months) for the sun to return to its original position. Then they identified twelve constellations that they observed were linked to the progression of the seasons. These astrologers assigned them names of certain animals and people. In Babylonia, for example, the rainy season was found to occur when the sun was in a particular constellation. So they named it Aquarius, or water bearer.

Around the year 2000 BCE, Babylonian astrologers believed that the sun, moon, and the five planets known at that time (Jupiter, Mars, Mercury, Saturn, and Venus) possessed distinct powers. Mars, for example, appeared to be red and was associated with aggression and war.