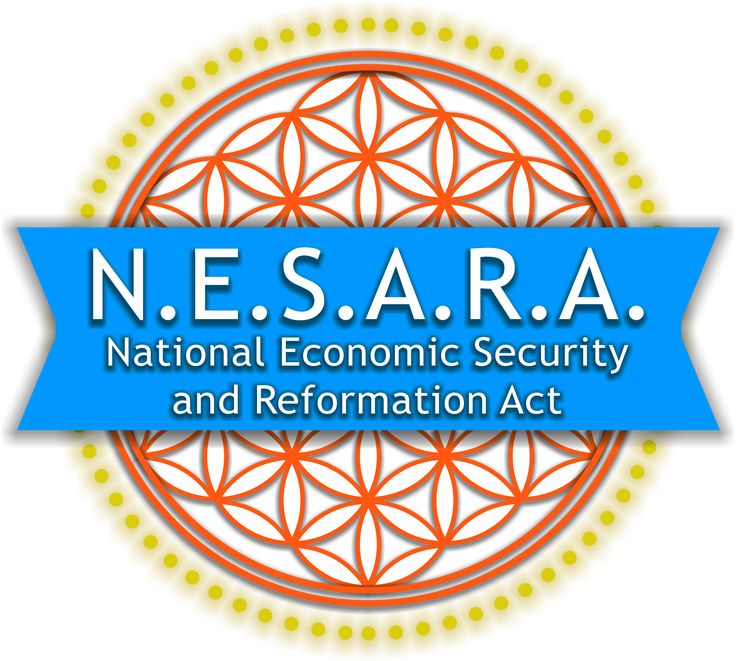 September 11, 2001 was the original date that NESARA was meant to be announced to the world. However, many evil players worked to prevent that from happening. Their attempts to sabotage NESARA are over now. NESARA is about to be implemented. Read all about NESARA and 911.

END_OF_DOCUMENT_TOKEN_TO_BE_REPLACED

Nesara (National Economic Security and Reformation Act) and Gesara (Global Economic Security and Reformation Act) are merging. This means the end of poverty, the end of debt, and the beginning of a new Golden Age for everyone in the world! No poverty, no hunger, no debt. Only Global Prosperity and Peace for ALL! Here we look at Nesara Gesara in Detail.

END_OF_DOCUMENT_TOKEN_TO_BE_REPLACED

The New Financial System is called the Quantum Financial System (QFS). It is like nothing that we have ever seen on this planet before. The QFS is so far advanced that it cannot be hacked at all. It will destroy the Central Banking system run by the Federal Reserve and owned by the banksters. The QFS has no equivalent in advanced technology and allows the Global Currency Reset to occur.

END_OF_DOCUMENT_TOKEN_TO_BE_REPLACED

BREAKING NEWS!!!!! The information below shows that the A.T.O. is fraudulent and illegally taxing us. Australian Taxes are Illegal! Some sections of this article appeared on Telegram and are attributed to Patriot101. The rest is written by me.

END_OF_DOCUMENT_TOKEN_TO_BE_REPLACED

On my Telegram channel I post multiple articles and news pieces about the current collapse of the Cabal’s money systems. I also post multiple articles and updates about where things are at with regards to Nesara/Gesara. On Sunday night I was given a download about what the meaning behind certain things that are going on in the GCR/RV world. I was also encouraged to write about them. There is A Sifting Process going on at the moment within the groups of people whose intention it is to rebuild society after the collapse.

END_OF_DOCUMENT_TOKEN_TO_BE_REPLACED

You know, it comes as a bit of a shock to me that people who have done really well in their personal growth and spiritual development choose to be blind to other aspects of what is going on in the world. It’s a type of Spiritual Arrogance in a way. Once they become ‘enlightened’, they think they don’t need to know about the practical aspects of this world, including money and the financial system.

END_OF_DOCUMENT_TOKEN_TO_BE_REPLACED

Are you one of those people who simply cannot believe that humanity is about to receive a miracle blessing in the form of financial abundance? So many people can’t get their head around the possibility that financial abundance and prosperity is about to land in their lap. Financing Nesara Gesara will be achieved by accessing the St Germaine Trust, the Rodriguez Trust, and all of the confiscated wealth of the Cabal. You can check out some of that confiscated wealth by viewing the following list of accounts. I will copy and paste the first part of Alcuin and Flutterby’s article. You will find a link to the original article at the end of this first section below.

Information about the St Germaine Trust and the Rodriguez Trust can be found at the end of this article.

END_OF_DOCUMENT_TOKEN_TO_BE_REPLACED

This is a copy of an update put out by Judy Byington. It is the announcement that Gesara Nesara is Active Now. The update was released on Sunday 02 January 2022.

For all of my clients who could not believe what I was telling them throughout 2021, you’re about to be positively surprised to find that my readings were correct, even though you didn’t want to believe it at the time. That’s okay. The positive things that are about to occur in the world are mind-blowing. Unless your mind had already cracked open to the possibilities of what’s to come, it would have been nigh impossible to believe what I told you.

The restored republics will be installed worldwide via a global currency reset.

Judy Note: “They flipped the switch: global reset, GESARA / NESARA on! Now is the time! It’s happening! The switch has been turned. It all started in London.”

END_OF_DOCUMENT_TOKEN_TO_BE_REPLACED 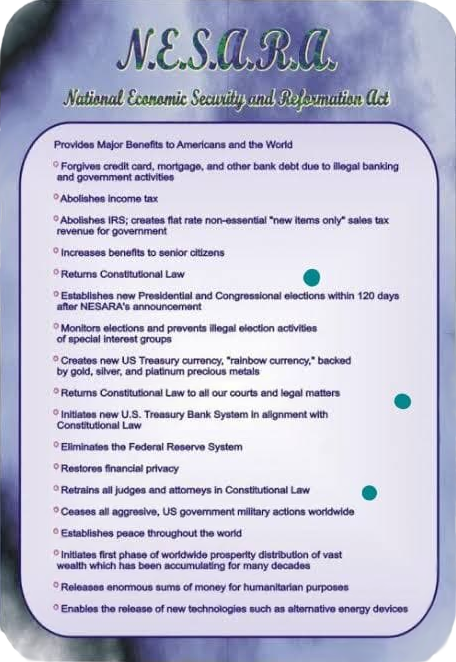 Most people are not aware of Nesara or Gesara. Of the few who are aware, many do not know the Background to Nesara Gesara. Here is a brief outline of some of what has gone on in the lead-up to the greatest transfer of wealth that the world has ever seen.

END_OF_DOCUMENT_TOKEN_TO_BE_REPLACED

We are about to enter the beginning of a new golden age! There is to be no more poverty, no more hunger, no more debt. There will only be global prosperity and peace for all! This is the final wake-up call. In today’s article I will explain Gesara Nesara In Detail.

NESARA has Merged with GESARA

The announcement of GESARA will now affect the Republic of the United States of America, along with the rest of the world amounting to a total of 206 sovereign nations. The new financial system is part of GESARA law.

The IMF will announce the global gold-standard monetary system once GESARA is announced. All remaining fiat currencies will be cashed in for gold-standard currency. Paper money is predicted to eventually be phased out and all currencies could be digital under the new financial system. Although, I believe that there will always be some form of cash around.

The goal is to make the transition event simple, smooth, and swift. The new financial system has been online for months and is hosted on a protected quantum server that cannot be hacked or accessed without permission. Why can’t it be hacked? Because it’s located on a satellite in the stratosphere of Earth, away from hackers and looters who might want to access it.

Notably, the wealth proliferation aspect is actually very stabilising. People who have new-found wealth in extremes are far more likely to want to help their relatives, their close friends, their fellow citizens. They are more likely to engage in humanitarian efforts because they will be capable of doing so. This is wealth building.

The ReValuation (RV) might cause a shortage of qualified workers because people everywhere will have money, so they won’t want to work. However, this will lead to higher wages and salaries. Higher wages and salaries will be reflected in prices, but this is counter-balanced by a drop in taxes of, in some cases, up to 80% of the final product cost price. Such a drop would result in deflation. As prices drop, savings increase for the worker and their family. This builds wealth.

Energy costs too are now an important component of the cost mechanism for any product. Energy costs will also drop as a result of free-energy and new technologies. When there is free energy, transportation, and replicators distributed to everyone, we will all become equal. No one will be enslaved. People will just do what they want to do. They will have lots of free time – time to reflect and be creative.

The future will be unbelievable. Our lives will be complete; our hearts and minds will evolve immensely.

For example; the purified waters of Antarctica will be used to turn the deserts green and restore mineral life to all plants and living things. The future will be unbelievably complete with Cards for our own Personal Credit. We will see the introduction and availability of Replicators that can produce everything. And surely most importantly, a new awareness of the power of our mind in order to avail our needs. Soon (also to become available) is real health care to make people healthy instead of sick, to regrow limbs or organs, or to reduce our age by 30 years.

Money and banks are tools of the Cabal to control us, with their debt-based economy which can never bring prosperity. Consequently, paper money may possibly disappear. Definitely banks will eventually disappear. Coinage will not.

The greatest short-term effect will be that the RV will create a large surge in consumers over time. Corporations that responsibly produce things that people really need will see a huge surge in business and profits for many years to come. This is wealth-producing. Why? Because a huge aspect of GESARA is the elimination of the national debt of every nation on earth. Taxes will be adjusted to be lower for citizens and corporations. Only a flat sales tax of about 15% on new items will be applied to purchases.

The pyramid structure of the global elite, including most governments, and corporations, has become dysfunctional. It created class separation and fostered the belief in dearth.

Spiritual evolution occurs when a person’s identity is no longer attached to material matters. There will never be a need to hoard anything ever again. Advanced Civilisations don’t wonder where their next meal is going to come from, how they are going to pay for their rent, or how they are going to get from A to B.

We are about to grow into becoming the next Advanced Civilisation in our corner of the Universe! True prosperity is coming to all of our countries VERY soon.

My novel, The Bravehearts of Belgrave High, is now published. I have completed the first in a series of novels that I wrote for teens. It is the courageous story of a young girl growing up in a home filled with domestic violence. She also has to endure a schoolyard and neighbourhood full of bullies. We read how she maneuvres her way through such a difficult situation. Plus, how she grows because of it, among other themes in the novel.

The desired outcome of reading this novel for young readers is that they will be inspired to treasure their unique differences. If they don’t fit in with the system or with those around them, then they should realise that it’s quite okay not to fit in.