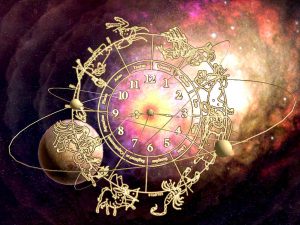 The Sidereal or Eastern system of astrology is based on the position of the belt of fixed stars and constellations in the heavens, whereas the Tropical zodiac or the Western astrological system is based upon the position of the Sun in relation to the Earth.  Sidereal astrology is the system of astrology used by some western astrologers which bases their interpretation around the use of the sidereal zodiac. It was introduced to the West by the Irish astrologer Cyril Fagan in 1944 and is practiced by a minority of Western astrologers.  Sidereal Astrology ties its signs of the zodiac to the actual constellations and is more complex, yet more mathematically oriented than Western astrology.

Procession of the Equinoxes

Originally, the first degree of the zodiac was common to both systems.  There are peculiarities in the Earth’s orbit, however. Therefore the belt of stars and constellations appears to shift in relation to the Tropical zodiac. As a result, the two zodiacs are drifting apart. This is called the procession of the equinoxes. Today the difference between the two systems is calculated at about 23 degrees. Thus, if an individual is born on January 1, he will have the Sun in Capricorn in the Western system. However, according to the Sidereal system the Sun will be at approximately 16 degrees Sagittarius.

By practical experience the use of the Sidereal method is preferable. It is mathematically more correct, and it also penetrates into the subtle elements of nature. Those such as mind, intellect, and spirit. This is to present a more complete picture of our soul’s sojourn in the realm of time and space.

The Sidereal astrological system notes the strengths and weaknesses that a person will experience in life, and also recommends remedial measures for improving our future. The karma or destiny which we are born with has been destined by activities in previous births. The spiritual astrology of India suggests that karma is not eternal and can be changed.