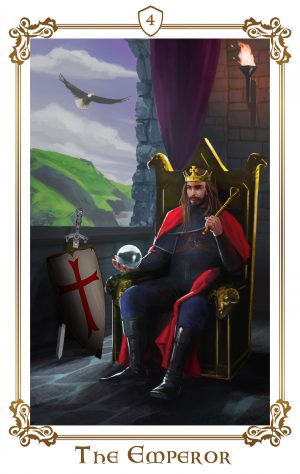 The Emperor’s youth and attractiveness show his masculine virility; he is a strong character who knows how to get things done. His crown shows his authority and sovereignty. Fourth card in the major arcana, he balances the feminine power of the Empress by representing male ability, although the ocean’s water outside the window hearkens back to his more free-flowing influence. The decisive will of the Emperor serves to guide the questioner in a definite direction on their path.

In fact, the Emperor is the embodiment of stability and order. He sits on his blocky throne, which relates to the numerology of this card, as there are four sides to a square. The questioner can see a ram’s head carved into the front of the arms of his throne. This connects the Emperor to Aries, the leader of the Zodiac, which is ruled by Mars, named for the God of war. Like Mars, the Emperor is ready to defend his realm. He has a shield and sword close at hand. The fact that these weapons lay on the ground show his much needed flexibility.

It is important for him not to be too rigid. The room where he is sitting has a large, open window, which lets in plenty of light and helps him to relax. We can see the mainland outside in the distance through the window. His castle is on an island, hence the view back to the mainland. It should be noted, however that his surroundings do have order.

Now we come to the theme of the unification of heaven and earth. The Emperor holds a sphere in his hand. This represents his connection to the globe, the world in which he resides and rules. He is literally bringing himself down to earth to deal with practical matters. He sits in daylight under a bright yellow sun. He deals with the conscious mind, practical decisions and that which can be plainly seen. This is in contrast with the Hierophant who dwells in a nighttime world of the soul. The Emperor’s expression is very thoughtful, although the partial obscuring of the sun could show how rigidity fogs judgement. The cross on the Emperor’s shield represents his connection to heaven and spirit. He is protected by his faith and linked to the transcendent. While these observations correspond to the elements of earth and air, the primary element of the Emperor is fire.

There is a flame burning close at hand. Fire links with the war-like nature of this sovereign. Aries, the Ram is also a fire sign. The Emperor is not afraid of conflict. He holds a scepter, which symbolises his power and rule, and connects him to the suit of wands, the fiery suit. Fire represents his activeness, and ability to get things done. To create order, one must be able to see the big picture.

An important character trait of this member of the major arcana is that he is far-seeing. This ruler has the ability to oversee something as broad as an empire. The eagle perched behind him represents impeccable sight and wisdom. The flame before the door represents a signal beacon lighting a clear path for the questioner. The peaks in the distance also represent his authority and vantage point from which the questioner will be able to see all around. There are stairs leading to a doorway to the unknown. Mysteries lie ahead. The emperor is concerned more with practical things. It is the Hierophant, the coming card who holds the keys to that ascendant door.

The Emperor Card Emerald Tolemac is a truly decisive guide, one who has a fiery readiness to take action and the oversight to formulate a good plan. In drawing this card, the questioner may see the beginning of a structure or a stability in their life that comes with the number four.