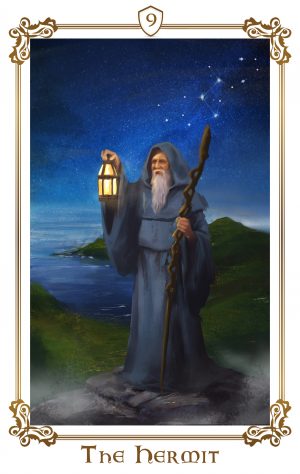 The Hermit Card Emerald Tolemac.  This card is from the Emerald Tolemac Tarot deck. The images from our deck are all copyright, created by Madeline Rose and artist Ahmad Sonhaji Silitonga.

The Hermit shines his light to illuminate the path of the questioner. The star inside the lantern is a Solomon’s seal, which symbolises wisdom. Legend has it that this seal was engraved in a ring worn by King Solomon, and it gave him the power to command demons. The fact that the lantern contains this seal means two things. The Hermit can offer mastery over the darker forces of human nature. He can also offer us perception of the astral entities that exist in dimensions around us, which fight continuously to hinder, harm and create havoc around us.

The constellation Virgo illuminates the night sky above the Hermit. Virgo is the star sign associated with this card, and represents the purity and perfection that the sage seeks in his solitude. The brown color of his dwelling place represents nature and the earth, the element which is associated with Virgo. The stars in the sky point to guidance. How many people have followed the direction laid out by these celestial lights to help them move forward in their journey, whether material or spiritual? Many have taken the stars to be evidence of a guiding force in the universe. The Hermit is able to discern and interpret the power of the star maps and use this understanding to guide others.

He dwells in the craggy grey mountainous peaks because he has achieved a height of wisdom. Mountains represent a summit of learning in the Tarot, often seen in the distance in other cards, here the questioner has access to the vantage point attained through scaling them.

The time of the card is night, which makes sense when you think about the phrase, the dark night of the soul. In his renowned poem, The Grey Monk, Blake says, “The Hermits Prayer & the Widows tear, Alone can free the World from fear.” This is a wonderful couplet because it highlights the feminine nature of this card. This aligns with the fact that the card takes place in the night, when the dark, yin principle reigns. The cave is also akin to a womb, and the Hermit is being reborn with his newfound knowledge. There is also a full moon in the sky which rules the feminine, reinforcing that principle in this card. The celestial body also relates to mystical knowledge, which is the currency of the sage.

The Hermit is shown exiting his stronghold of soul searching because such wisdom is meant to be shared. He is emerging to be a guide. The open door represents an open mind. As the singer, Frank Zappa says, “A mind is like a parachute. It doesn’t work if it is not open.” This is a lesson that the Hermit has learned very well in his solitude, weeding out that thoughts that lead to a narrow mind, such as those motivated by jealousy and fear.

The colour grey of his cloak lets the questioner know that it is possible to overcome the maddening effect of black and white thinking. When you mix these colors you get grey: a resolution of duality. The fact that the sage is shrouded in a long robe lets the questioner know that he has something worth knowing, which cannot readily be revealed to everyone. It takes work to gain access and the help of his lantern which he is willing to offer.

The Hermit looks very sure of himself in his emergence. His face is placid as he surveys the world lit up by his lantern. This sense of being at peace with himself and the world he surveys is one of the charming gifts of solitude. Compared to some of the other cards, like the Wheel of Fortune that follow, The Hermit is a serene card, without a great preponderance of symbolism. The simplicity reflects the clear and ordered mind that can result from meditation and spending time alone.

The Hermit also carries a staff. His staff represents the knowledge that he has gained and which he leans on for stability. It also represents his authority, gained from virtuous soul seeking. This kind of authority is not punitive but earned. The questioner can rely on the fact that when pulling this card a time of reflection will certainly bear fruit.