The Three Aspects of the Triple Goddess 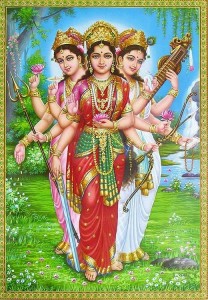 The Three Aspects of the Triple Goddess

The creative force that is the source of the powers behind our Universe is essentially Female moreso than male. She is known as Shakti. She has three aspects – Creator, Maintainer, and Destroyer. She is a triple Goddess who gave birth to the Beings who created our Universe. Those lesser gods and goddesses have had different incarnations of each of the main aspects of creation/life/destruction powers at various times throughout history. Those incarnations are humans who live here with us on earth. They incarnate here to help us, to live beside us, and to help us remember who we are.

Although not usually known as being an incarnation of one of those three aspects, the men and women who embody those aspects come to this 3D dimension from the 9th dimension to help and assist humanity to restore its own goodness. Whilst in the 9th dimension, two of the three Goddesses gave birth to the souls of almost all the beings on the earth who are human. Note that I say almost all, because not everyone you meet is actually human.

This creative force is known as Maha, which means the Big Divine Light, and the meaning of Shakti is the primoridal power of active creation. Maha Shakti is the Divine Mother of all creation, and she is beyond gender. She is the principle of activity. In other words, she is the driving force behind everything, even the gods. Without her there is no movement, no evolution.

She is the one. She is Mother of all gods, the Divine Mother of humanity, the Mother of matter, and as I said in the very first part of this article, her form is feminine in that she creates life. She is all goddesses.

She is the one who acts in the name of God. She is activity. She comes as birth/creation, balance/life and death/destruction, and her appearance is threefold. Her essence is embodied in the triple goddess. She is:

Parvati aka Kali, consort of Shiva

And She is their Inspiration!

The Devi Mahatmyam scripture is divided into parts, dedicated to the Hindu Goddesses Kali, Lakshmi, and Sarasvati.  The section dedicated to Goddess Lakshmi has a meditation that says:

Goddess Lakshmi, like Lord Vishnu, is a great warrior (although that side of her isn’t very well known). She is the soul child of Goddess Kali. Because of that she has the ability to utilise Goddess Kali’s great powers when she needs to. Those powers are a part of who she is, being the daughter of Kali and Shiva. The “discus” (Sudarshan chakra) is a weapon that she throws and beheads her victims with, and when done it returns to her finger. Lord Vishnu has the very same discus.

There’s a story in the Vishnu Purana in which a little boy named Dhruva has a father who is a king. His father has a new wife, and that wife has a son. When Dhruva goes to sit on his father’s lap, the stepmother stops him, saying that only her son may sit on the king’s lap. When Dhruva asks his mother why he may no longer sit on his father’s lap, she tells him to talk to Vishnu about it. He gets out of bed in the middle of the night, and first goes to the Vishnu murti to pray, but then decides to go seek Lord Vishnu in person. He sneaks out of the palace in the middle of the night. He’s five years old.

The entire palace is in an uproar when they discover him missing, and in truth, he’s in very real danger, as you can imagine a five-year-old runaway would be. Time and time again, Goddess Lakshmi protects him from one danger after another, including thieves and bandits, as well as snakes and fire. She even provides him with food and water along the way. Goddess Lakshmi is Lord Vishnu’s shakti, and those worshiping him will fall under her protection even if they don’t pray directly to her.

Goddess Parvati is known by different names like Lalita, Uma, Gauri, Kali, Durga, Haimavati etc. Two of her fierce but very powerful forms are Durga (Goddess beyond reach) and Kali (Goddess of Destruction). As the mother of the universe, Goddess Parvati is known as Amba and Ambika, which means ′mother′. As Lalita, she represents the aspect of beauty.

Goddess Parvati aka Goddess Kali is the woman in the Book of Revelations who gives birth to the child. The child is Lord Kalki who has come to wipe away degradation and clear the world of its demonic influence. Lord Kalki is the Returned Jesus.