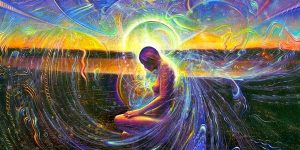 The topic that I’ll focus on this month is Ayahuasca and Dimethyltryptamine. In this article here, my ol’ teacher Stuart Wilde writes about how Ayahuasca can help to heal depression. It is a rapid healer that far surpasses any synthetic drug that your doctor will prescribe. Stuart’s article is below.

DMT, Depression and the Paranormal

Dimethyltryptamine (DMT – see at the end) is the active ingredient of the Amazonian brew Ayahuasca. The Brazillian government studied it for seven years and they declared it a supplement, as DMT occurs naturally in the body. They made it legal.

One Drink Healed Her

I met a lady from New York at an Aya’ ceremony in Ecuador, she told me she had been in therapy for ten years and that one drink of the sacred brew had cured her mental problems, whereas the therapy had not made any real difference.

DMT cures depression instantly because it alters the serotonin levels in the brain, people who have a disturbed serotonin level suffer from mental illness.

And if you are depressed the ghouls in the demonic world get closer as they are emboldened by your moods, so you feel even worse.

People fall for ghoul tricks that make them scared of things that go bump in the night. But we are surrounded by dimensions-upon-dimensions, and humans are straddled across those dimension. You are so much more than you probably know.

The medicine has a miraculous way of knowing what you need. It’s in communication with your Higher Self – the two act together. Para-normal is the new normal – it’s the advanced way. It’s the fast track to self-healing for many.

If you can see yourself in a higher context, inside your God-light, then often your human problems seem small and insignificant. The solutions are obvious: one Aya journey can change everything.

Transcendence in a cup!

N,N-Dimethyltryptamine (DMT) is a naturally occurring psychedelic compound of the tryptamine family. DMT is ubiquitously found in plants[3] and also in trace amounts in mammals, including humans, where it may putatively function as a trace amine neurotransmitter[4]. It is originally derived from the essential amino acid tryptophan and ultimately produced by the enzyme INMT during normal metabolism.[5] The natural significance of its widespread presence remains undetermined. Structurally, DMT is analogous to the neurotransmitter serotonin (5-HT), the hormone melatonin, and other psychedelic tryptamines, such as 5-MeO-DMT, bufotenin, and psilocin (the active metabolite of psilocybin).

In some cultures, DMT is ingested as a psychedelic drug (in either extracted or synthesized forms).[6] When DMT is inhaled or consumed, depending on the dose, its subjective effects can range from short-lived milder psychedelic states to powerful immersive experiences, which include a total loss of connection to conventional reality, which may be so extreme that it becomes ineffable.[7] DMT is also the primary psychoactive in ayahuasca, an Amazonian Amerindian brew employed for divinatory and healing purposes. Pharmacologically, ayahuasca combines DMT with an MAOI, an enzyme inhibitor that allows DMT to be orally active.[8]