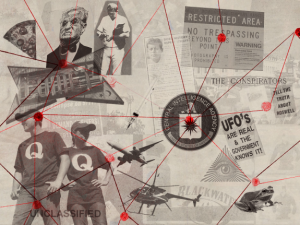 Do you believe that all of the evidence presented about the evil in the world (including the COVID-19 pandemic), is Still a Conspiracy? Read this article and do your research, and you’ll soon change your mind.

The ENTIRE world is in lockdown. Let that sink in (if it hasn’t already). 5G is being rolled out worldwide while people are inside their homes. The Cabal hopes to use 5G to harm and control the people. Don’t believe it? Do your research on the health effects of 5G and how it is linked to the virus. Then, research and find out what Trump has done that has already solved this problem.

Prince Harry and Megan Markel have left the royal family. I would too if I found out that my own family had plotted to have my mother killed. Especially if I discovered they were satan-worshipping child traffickers! Prince Andrew is now a convicted pedophile. He was extremely close to Jeffrey Epstein who is another convicted pedophile. He was the honey-trap for the young girls who Epstein and Gislaine Maxwell wanted to lure into their fold. Research Epstein Island if you have a strong stomach.

Research Pizzagate if you can handle it.

Wiki leaks exposed Hillary Clinton for being a child sex trafficker along with Obama, Podesta, and many other people in power. She conveniently deleted over 300,000 emails, and destroyed a laptop and mobile phone she used while in office… and gets away with it??

Harvey Weinstein, Hollywood’s biggest germ, has finally been arrested for sex crimes. He’s another elite pedophile. After his arrest, all of a sudden he gets the “virus”?

Prince Charles and now the Queen of England conveniently have the virus. Yet the Queen fled the palace to self-isolate weeks ago? Hmmm.

All of your Hollywood favourites supposedly have the virus. Adrenochrome is the reason for this. Research it!

Bill Gates is pushing vaccines and global depopulation, and he conveniently owns 15% of the WHO (World Health Organisation). Yes, the WHO is a business. Go figure. The WHO is also owned by George Soros and the Rockefellers. Don’t know them? Research them. This information alone should make your stomach churn.

Google is currently uncensored and you can access this information. Why is it uncensored now? Research and find out why. While you’re there, keep googling Adrenochrome and start to follow the trail… An Adrenochrome batch was made in Wuhan, and it was laced with a tracing drug. This is how the white-hats could find out who was taking it. How fitting!

Are you connecting the dots yet?

The U.S. has deployed 30,000 troops to Europe for “training”. They are in training without masks or any hand-sanitiser …  How very interesting!

600 Mexican drug cartels have recently been arrested, one of the biggest busts in history by the U.S. why didn’t we hear about that?

Trump openly speaks about this more and more in his daily press releases as the days roll on, speaking about winning the war. Take notice of how he barely mentions the actual virus in his Coronavirus briefings.

298 Saudi royals, billionaires, lawyers, and judges were recently arrested for crimes and corruption.

3 Chinese including 1 Harvard professor were prosecuted for economic espionage a few weeks ago. This is all extremely relevant to Wuhan, Covid-19, and everything that’s going on right now. Research this.

Trump crashed the Fed bank. They bought all of the gold, and the U.S. now holds the keys to creating a GOLD BACKED CURRENCY, removing the fiat. The Fed and Treasury have basically merged, meaning that Trump is now the Chairman of the global banking system with the people’s money. Not the Rothschilds, Rockerfellers, Soros, Goldman, Morgan, Stanley, and the list goes on. This is HISTORIC.

For this to be possible the economy must be crashed. All corrupt coin needs to be drained. A 14-28 day lockdown is the best way to do this. It’s an even better way to redistribute the money back to people on government grants, PAYG refunds for business, and ATO offsets. Is any of this making sense yet? No longer will 99% of the world’s wealth be owned by an evil, greedy, and corrupt 1%.

Believe what you want. Take what I say with a grain of salt if you want, but open your eyes beyond the virus. And, for fuck sake, do some research! It’s all happening as you are reading this.

Dozens of the world’s most powerful CEOs have stood down. Why? Disney, Microsoft, Groupon, and over 1300 of the top CEOs. They are all gone. This was before the crash, mind you. What are they running from?

Thousands of arrests have been made for child trafficking, human trafficking, and sex abuse. Yet the mainstream media is not telling you about this. What are they hiding? Nurses are coming forward speaking publicly about the fact they’re treating hundreds of children in hospitals right now. Not for Coronavirus, but for malnutrition. Some children are extremely deformed and all have extreme psychiatric damage due to trauma. Research where these children are coming from.

It’s widely known that there are underground tunnel systems (research D.U.M.B ). These tunnels have been used for decades to traffic people as sex slaves and for organ harvesting, across the globe. There is currently a monumental military operation going down, lead by Trump, to uncover these children. The military has arrested many of those involved and more are being arrested and will be arrested.

They will stop this evil once and for all. The D.U.M.B.S. are being blown up all across the globe. Research the website that gives daily reports on volcanic activity… they aren’t natural eruptions. Rather, the shaking of the earth is caused by the D.U.M.B.S. being blown sky-high in order to completely destroy them.

The War On Earth

What you are seeing is a WAR. An “invisible war” that Trump keeps talking about. It’s the war on earth that is spoken of in Revelation. It’s a war between Trump and his Secret Service against the elites, bankers, and mainstream media. A war between good and evil. Pay attention to the bigger picture!

Shutting Down the Trafficking Rings

Trump’s military has caught and arrested more pedophile and child trafficking rings that anyone else in the world. However, I bet that you didn’t know that because the mainstream (George Soros funded media) make out that he’s a moron. Trump will go down in history as the most powerful and successful President ever in the coming weeks.

There is no need to panic or have fear. This whole thing is working out as it needs to. Trump and his team will remove the corruption and power that has taxed your hard-earned dollars, loaded your loans and credit cards with interest, and pulled the wool over your eyes. We have been living as slaves to the system for long enough!

You’re going to see some big names get called out, and you likely won’t want to believe it.

Do you still believe that 9/11 was a terrorist attack from Osama Bin Ladin who trained donkeys to fly Cessnas (who then magically up-skilled into Boeings)? That they flew aluminum planes into 580m steel-reinforced towers that collapsed like a deck of cards. (not to mention tower 7) which was a block away, but folded as well?

Only an airplane made of Titanium could have flown through that building as was shown in the film footage. And if it were made of Titanium, it would be too heavy to fly. Think about that for a moment.

Let’s not forget the 6 seals who took Osama Bin Ladin down. They were killed in a mysterious chopper crash (RIP fellas).

The “sheeple” are in for a huge wake-up call.

Most if not all of the big banks will go bankrupt – they are already on their knees. Income tax will go away. The ELites will no longer rule you or the world. It’s time to pray or meditate, whatever your faith or belief is.

Do You Still Have Doubts?

Don’t believe any of this? Do the research for yourself. If I were you, I would read the Clinton emails on Wikileaks. Once you read those you’ll believe the rest. Many of the most powerful people are more sick and evil than you could ever imagine. Start listening to Trump’s daily press briefings. Read between the lines! And when you start to realise that this is not a conspiracy theory, please share this post.

Those of us who are digital warriors are here to spread “this virus of the news to reveal and expose these sick and evil people”. We are here to help Trump and his military army bring them down. It is our job to help wake up the rest of the world because so many are still sleeping.

It’s time to be brave, be courageous, and speak out. Sure, you might lose a few friends along the way, but at least you’ll know who your true friends are. Effectively, you’ll be leaving one group of friends behind and moving on up to another group of friends whose eyes are open to what is going on. Then we can all stand and unite together.