A Love Story About the Gods 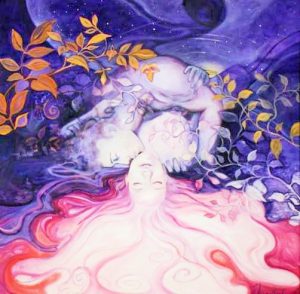 A Love Story About the Gods

This is A Love Story About the Gods …

There once was a great leader who inspired many people all over the world. He was deeply loved by those who knew him, despite the fact that he had made many mistakes along the way through life and despite how he could be very gruff with people at times. He had a way about him that allowed people to get only so close, but no further. This was for a reason though; it was because of who he was in the spiritual dimensions and because of the fact that one day he would announce who he was, and there would be a lot of scoffing, disbelief, gossip and impending danger. He needed to have few attachments so that he could move quickly if the situation required.

He could be very, very funny, and much of his knowledge was shared via humorous explanations of how things work. This was because he knew that the body emits small amounts of light called biophotons, and that humans can be healing to each other just by being together and having fun. The problem is that stress makes people stiffen and forget this natural power. Having fun doesn’t seem important. It seems random or weird. He knew that it wasn’t at all. He knew many secrets that he put into practice…. he walked his talk.

Both Loved and Hated

He was loved by many but was also hated and misunderstood by others. Outspoken about the system and the corrupt leadership of the time, he caused a lot of ruffled egos. He wasn’t the least bit unlike another leader who lived 2000 years prior… one whose life was very well known.

He had spoken many times throughout his writings of the importance of his work, because inside his writings were codes. Yet many of those who claimed to be his students merely skimmed much of what he had to say, or were so locked into their amnesia that they failed to trip the codes.

To read more of this article, please click on the following title: A Love Story About the Gods