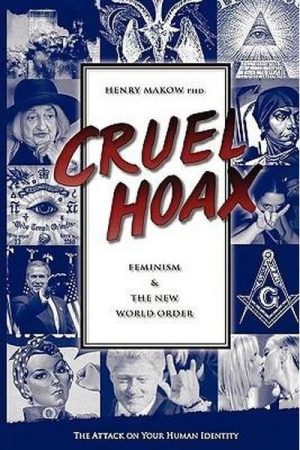 Feminism, our official gender ideology, masquerades as a movement for women’s rights. In reality, feminism is a cruel hoax, telling women their natural biological instincts are “socially constructed” to oppress them. This is how we’ve got to the point where society is at now, Erasing Gender Identity.

Feminism is elite social engineering designed to destroy gender identity. It does this by making women masculine and men feminine. Increasingly, heterosexuals are conditioned to behave like homosexuals. Homosexuals generally don’t marry and have children. Courtship and monogamy are being replaced by sexual promiscuity. This was prophesied in Aldous Huxley’s Brave New World.

The Rockefellers and Rothschilds created feminism to poison male-female relations. It was typical of their way of operating, which is to divide and conquer. Their twin objectives are to depopulate the planet and then to create a totalitarian world government. Why? These bankers create money out of nothing and think that they are God.

Henry Makow’s book “Cruel Hoax” shows the connection between feminism, Communism, and 9-11. It examines male-female relations and shows how we can take back our heterosexuality.

Power for Love (The Heterosexual Contract)

“The gesture of a man opening a door for a woman illustrates how men and women relate. We all know that a woman can open a door herself. But when a man does it, he is affirming her femininity, beauty, and charm. When she graciously accepts, she is validating his masculine power.

This trade, a woman surrendering physical power in exchange for a man’s protection (i.e. love) is the essence of heterosexuality. In order to develop emotionally, men and women need this mutual validation as much as sex itself. Sex is an expression of this exclusive contract.

Under the toxic influence of feminism, women open their own doors. Neither sexual identity is validated; neither sex matures emotionally. Men feel redundant and impotent; women feel rejected and unloved.”

Makow lays out this argument in over 55 articles. Once you understand what is happening, the world will never be the same. Click here to buy the book.

You’ll find articles there that will teach you how to discern the right partner for you. Also how to maintain the relationship, and how to leave should they be treating you badly.