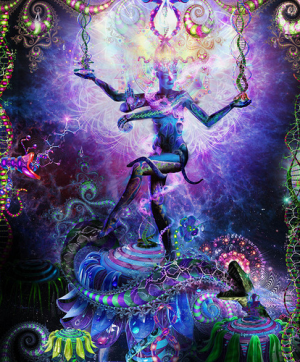 I know that this is not a Stuart Wilde article, but I’m going to post it in the Stuart Wilde section in the category devoted to Ayahuasca and Plant Medicines. Stuart had much success in his own life with the Ayahuasca experiences that he had, and as such advocated that his students also do some work with the medicine. This is a great article for those who want to know What is Ayahuasca?

The shaman who wrote this article tried to explain what Ayahuasca is in the simplest and most friendly way possible.

Ayahuasca – Mother of all Healing

There are two Amazonian plants of which the leaves of one and the bark of another are mixed, and this creates Ayahausca (a medicine, brew, potion, infusion). It has been used for more than 5000 years by shamans, healers, or masters of the Amazon as a path to gain the expansion of consciousness (subject – soul). And now it is used in Peru in centres to rehabilitate drug addicts who are addicted to hard or prohibited drugs and legal drugs such as pills.

The drink that is created by the mix of bark and leaves is the largest known plant source of dimethyltryptamine (DMT). DMT is a neurotransmitter produced naturally in our brain from the pineal gland that is responsible for dreams in the REM phase of unconscious rest.

It activates the pineal gland. This gland is closely related to mystical religious experiences. The is the most powerful relaxant on the planet that was patented in the USA as an antidepressant, and was declared cultural heritage in 2008 by the Peruvian government resolution directorial national 836 / Inc.

As well as DMT present in the drink, our own brain produces and secretes naturally the substance DMT that is responsible for night dreams.

In other words, when someone sleeps, or when he meditates with yoga, his brain starts to secrete a chemical substance equivalent to the DMT in Ayahuasca, which allows him to dream. The effect of drinking Ayahuasca is then, roughly like experiencing a dream, but it happens while we are awake, ie. lucid dreams. To feel the effects of it is like dreaming, but with full awareness of the content of the images and the emotional content that occurred in the dream. This is to access the infinite information that contains our sub-conscious or spiritual world.

Ayahuasca places the brain in enlarged states of vibration, working optimally, and thus the person reaches high consciousness. This is not a drug. It does not create dependency. Nor does it cause unstable hallucination states. Nor is there a loss of consciousness. On the contrary, the feeling is of total control, greater mental lucidity, body control, and the participant well knows where he or she is.

After ingesting Ayahuasca, one’s consciousness is clarified and his or her brain wave patterns are altered.

At this level of paranormal ability, it spontaneously emerges to awaken neurons, increasing intellectual and creative ability.

The result is the gradual pacification of personality and mind. Also, decreased anxiety and fear, and rebalancing of the nervous system – reason and emotion. It allows the brain to gradually pass to beta states (normal activity) towards alpha waves (Relaxation). When it reaches the deep Theta States, this is where the experiences of spiritual ecstasy occur.

A number of studies carried out by the people who have observed ayahuasca users certify that users become balanced people. They have optimum health and memory, with ease of learning, and a greater peace of spirit. They also have a deep respect for nature. Plus a desire to seek in a balanced way how to promote peace and harmony.

The basic parameters of an Ayahuasca experience are following. Personal identity, connection to the outside world, temporality, and feelings of significance are also observed. In the past and until today, Ayahuasca medicine is one of the central pillars and several tribal cultures of the Amazon. The Australian aboriginals use it too. They use aspects of the wattle tree as one part of the mix.

Thus psychologically, as a divine or wonderful drink, Ayahuasca offers us the possibility to accept our subconscious or unconscious world. Doing so will reveal and help us discover the mystery of meeting our futures selves as well. This openness is tantamount to a new dimension of conscience.

Ayahuasca in this modern age is seen as an extraordinary chemical substance, equivalent to a neurotransmitter or brain hormone that activates the psyche and exposes or reveals the infinite human potential.

Ayahuasca is a de-hallucinator, because it allows us to perceive reality as it is. Thus we emerge from the cultural and social delusion in which we might be trapped.

An Ayahuasca experience helps us to travel through a path of spiritual openness and self-discovery of our essential being. Doing Ayahuasca is the true recognition of our soul and reconciliation with the whole. I mean contact with the supreme cosmic deity.

You will gain developed mental imagery, more creativity, inspiration, and resources. You will want to innovate things and create new ideas. How? By achieving an increase in awareness to create and recreate, to think, and to improve your activities.

Ayahuasca allows us to live with great empathy. It gives us complete communication with the whole and also allows us to see within ourselves. A view that uses the most heightened level of our faculties that is possible to achieve.

The reason why they wanted me to inform you of this is this. Because were you to do an Ayahausca journey, you’d get the chance to see for yourself what you need to do to resolve your current situation. You’d get to talk direct with your own guides and your future self. These entities all want to help you to get to where you’re meant to be.

Sometimes doing Ayahuasca can be a confronting experience because the spirit behind it makes you look deeply at yourself. Some people don’t like what they see. Others dislike it so much (because they are so evil to begin with) that it terrifies them. However, Ayahuasca gives you the chance to heal yourself of whatever needs healing. Only those who’ve done a certain amount of clearing work already are invited by the spirit of Ayahuasca to learn more. They are also invited to go on an Ayahuasca journey in order to heal their soul.

The first novel in my series of seven is now published. It is a courageous story of a young teen growing up in a home filled with domestic violence, and shows how she manoeuvres her way through such a difficult situation. Click here if you’d like to know more about this novel.