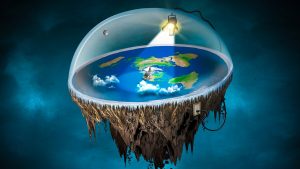 The Earth is round. All science confirms this. No science supports a flat Earth. Busting the Flat Earth Theory isn’t really that difficult. Using science and physics, here are some excellent reasons to KNOW that the Flat Earth Theory is a complete myth. It was actually put out there by the CIA as a way to divide and conquer the people, and cause us to fight amongst ourselves. Sneaky, to say the least, and completely deceptive at worst.

What it does for Truthers when we go around touting that rubbish is it totally discredits us from anything else that we have to say. Be careful who you listen to, and be careful what you believe. Don’t immediately accept that what you are told is true. Research it and find out if you have been deceived.

If the Flat Earth Theory were true, flight plans, fuel amounts, radar range, weather forecasting… all of these would be affected by the idiotic Flat Earth Theory. But it ‘flat-out’ isn’t (excuse the pun). Pilots know that the Earth is round as navigation is based on the round Earth model.

Pilots Don’t Think That the Earth is Flat

Christine Graham says that her pilot father set up his own telescope and mount. He told her the following:

“I’ve had to pay attention to the coordinates by which I am located in. Even going 30 miles in any direction changes my coordinate location, and I have to set my telescope up accordingly in order to get it to work and track the sky properly. I can’t use the coordinates set for one location…and hope it’ll work for another. The telescope will not track properly!

Flattards are full of shit if they honestly believe the Earth is Flat and continue to deny the mountains of evidence that shows they are wrong.

My father was a pilot. And a Christian. Believe me, he if he had doubts of a spheroid Earth, then becoming a pilot put those doubts behind him.”

Do Any Pilots Believe the Earth is Flat?

It is highly improbable that any qualified pilots would believe in the Flat Earth Theory. Part of their basic training involves learning how to navigate, including understanding parallels and meridians, and using charts based on latitude and longitude. If the Earth was flat, those charts wouldn’t ‘work’.

No serious pilots – no international pilots – believe in the Flat Earth Theory. You’d have to be a pretty dumb pilot to do that. Now, I’m certain that dumb pilots exist, because the stupid are everywhere. But generally speaking, pilots are fairly well educated in at least the basic physics of flying, and if you believe in physics at all, you should believe the Earth is a sphere.

It’s hard to imagine the level of cognitive dissonance that you would need to have in order to know how planes work and still think that the Earth is flat, but I suppose it’s possible. It would be the same as a priest who does not believe in God. Unlikely, but possible, I suppose.

There is more than one instrument in the cockpit that is designed to work on a spherical Earth (and only on a spherical Earth). There was actually a pilot who, even knowing how planes work, didn’t think that he could make his plane take off from a treadmill until he actually did it on Mythbusters, so just because most pilots are fairly well educated doesn’t mean that they are all smart.

Length of a Flight

If the Earth was flat, why don’t east-west flights in the Southern Hemisphere take longer? Here are some questions for those of you who do believe that the Earth is flat:

Distances in the Southern Hemisphere between places on of the same longitude would have to be so much further than in the north. Lets pick two flights Rome to LA in the north and Sydney to Santiago in the south. Given that on the Flat Earth map the distance from Sydney to Santiago is 3-4 times longer why does the flight only take 40 minutes longer? Please limit answers to explanations that don’t involve magic aeroplanes that travel at mach 3, unexplained phenomena such as 3000 km/h jet streams, or time dilation.

At the end of December in any given year, at around 8am Eastern Australian time, the entire continents of Australia and South America, and most of North America are bathed in sunlight. Please explain how, with the Flat Earth model of the sun, such an incredibly large spotlighted area does not also light up the rest of the Flat Earth?

Pictures of Earth from Space

If pictures of Earth from space aren’t proof enough then there’s nothing to convince. How many ships have sailed around the globe? Why don’t the oceans pour off the edges and why can’t we locate the edges? The whole idea is completely ludicrous.

Why do Flat Earthers think that NASA, scientists, sailors, pilots etc persist in lying about the shape of the Earth? It starts with NASA. They have pictures of the Earth that pretty clearly show that the Earth is spherical, as you can see the Earth rotating with time lapse photography. Flat Earthers’ “know” this to be false, so they assume that there’s a conspiracy within NASA to hide the truth. The thing is, once you’re assuming that a conspiracy exists, it’s easy to assume that any evidence that doesn’t agree with your beliefs is a product of that conspiracy.

James Grima is a Ground School Instructor (ATPL, PPL, Radio theory) at the European Pilot Academy (2017–present). He says the following when asked how many confirmed licensed pilots are actually Flat Earth believers:

Gyroscopes are used in several aircraft instruments, such as the INS/IRS, Attitude Indicator, Direction Indicator and Turn Indicator. We have to study these ghastly devices both at Private (PPL) and Commercial (CPL/ATPL) level, and we learn how the Earth’s 15°/hour rotation causes precession issues with some of these instruments. Funnily enough, a Flat-Earther on a Netflix documentary released recently, bought himself a $20,000 Ring-Laser Gyro and tested this theory himself, with disappointing results for his cause.

The Earth being an Ellipsoid, and again due to its spin, we can observe a very specific behaviour that shapes the winds and atmospheric pressure systems across the planet. Again, we study this quite well in our Meteorology curriculum for both PPL and CPL. We learn how high pressure areas shift towards low pressure areas, however once a pressure gradient pull starts, a secondary effect will pull it towards the right in the Northern Hemisphere, and to the left in the Southern Hemisphere.

In subjects such as Navigation, we study how the Earth’s shape has a bearing on how we navigate from one place to the other. This is quite obvious when it comes to maps, as converting a spherical surface into a 2D one presents problems such as how a straight line drawn from places of the same latitude (around the same part of the sphere above the Equator) on a map, will not be the shortest way in real life. Example: 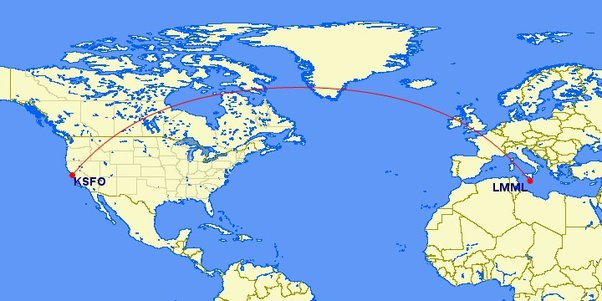 KSFO (San Francisco) is at 37° North, and LMML (Malta) is at 35° North. If the Earth was Flat, a straight line on a map would give us the shortest distance when flying, yet a Great Circle curved track is the shortest way to get from one place to another in real life. The length of a trip such as the above allows you to take advantage of the ellipsoid shape of the Earth. 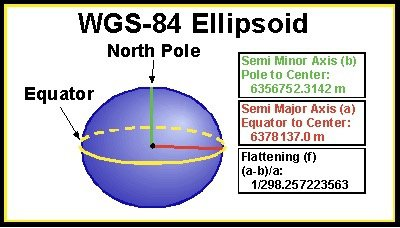 Hence, this is why I’m comfortable saying that the answer is to your question is none.”

My Own Thoughts on the Subject

I have a theory of my own. You only have to watch as a drop of water falls from a height to see that it forms a sphere as it moves through space. Why would the earth be any different? Of course it is a sphere! It can’t be anything else but a sphere.

I’m sure that ship captains would say the same about the Flat Earth Theory as what pilots do. They have to use the same type of navigation instruments as pilots.

Now, there are dimensions of existence at other levels which might be flat, but Earth is certainly not one of them. There is one unusual fact that I will explore in another article though, and that is that the Earth is hollow. Admiral Byrd discovered this fact by flying into the opening to hollow earth around the turn of the 20th century. That fact is very interesting, indeed.